The history of the Zulu people can be traced back to the 19th century hero, Shaka Zulu, who, after the death of his father Senzangakhona, conquered many nations and amalgamated them under his reign, thus creating a huge Zulu nation. The name AmaZulu literally means “the people of heaven.” Shaka was the third born son of Senzangakhona. When Senzangakhona died in 1816, Shaka took over the reigns and within a time period of twelve years he became the greatest leader of his time. He formed the phenomenal nation of the Zulu people. During his wars that were known as Mfecane (or Difaqane), many people fled KwaZulu-Natal, then known as Natal, and moved north, spreading along their paths the IsiZulu language. In 1828 Dingaan, Shaka’s brother, assassinated him. After Shaka’s death in1828, Dingaan became the king of the Zulus but was killed in the battle of Ncome. However, the Zulu people won this battle. Cetshwayo, his brother, took over the reigns and in 1879 the Zulu warriors defeated the British in the battle of Isandlwana. In 1887 the British annexed Natal, today known as KwaZulu-Natal, and later incorporated Natal into a colony. Many of the cultures, customs, and traditions of Shaka’s time remain the corner stones of the Zulu people, and each year the Zulu nation celebrates the Heritage Day during which they commemorate their hero, Shaka Zulu and also revive their cultural traditions.

Culture of the Zulu people

The Zulu people have a distinct culture that distinguishes them from other ethnic groups. During each year they hold ceremonies that revive their culture and tradition. These ceremonies include, among others, the Heritage Day, which is held to celebrate the life of Shaka Zulu, the most powerful king and creator of the Zulu nation. What also distinguishes the Zulu people is the traditional dress of women, which mostly includes beadwork. Men’s traditional clothing consists mainly of cowhide that is used to cover the bottom front and back. Traditionally, women and men walk barefooted when they wear these clothes. 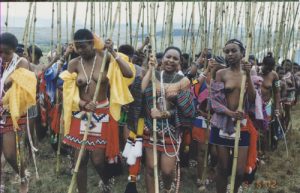 Thousands of Zulu virgins converge at the Enyokeni Zulu Royal Palace in September every year to celebrate the Umkhosi woMhlanga (Reed Dance Festival). The Reed dance is an activity that promotes purity among virgin girls and respect for young women. The festival is part of the annual festivities on the calendar of the Zulu nation. During the Reed dance the virgins fetch the reeds from the river and bring them to the palace for the royal king, King Goodwill Zwelithini to inspect. It was during this festival that the Zulu King chose his youngest wife. Some people criticize this festival, claiming that it disempowers young women who may be made wives at an early age without being given a choice to chose the husband that they like. But to many, this ceremony helps to preserve the custom of keeping girls as virgins until they get married.

The woman’s work is never done. Zulu women, like women of other ethnic groups, do a couple of domestic chores. Notable is that the work of Zulu women in urban areas is much easier than that of the women in rural KwaZulu-Natal, probably because urban homes are provided with electricity and water. Among the chores that rural women do are collecting wood, fetching water, cooking, doing laundry, taking care of the elderly, and raising kids. 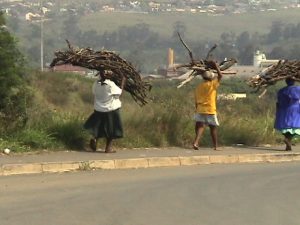 Usually, rural women do not have appliances such as electric stoves, electric kettles, vacuum cleaners, and electric lights. They have to go to the forest to collect wood for cooking and for bringing warmth. This chore sometimes keeps women away from home for the whole day. Oftentimes women have to leave early in the morning and only come back home late in the afternoon. The cutting of trees and bushes has resulted in the depletion of many forests in rural areas. Women usually go to the forest in the groups of two or three in order to keep each other company but also to protect each other from wild animals that may harm them. 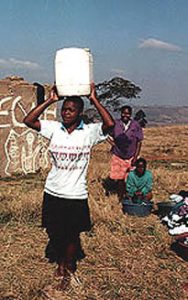 Women usually walk long distances in search of water. They often carry steel buckets, clay pots, or plastic containers. Most women master the art of carrying the water container without hand support at a very early age. There are rural areas that have water taps, but many places still use natural spring water, in which frogs and crabs are commonly seen moving freely. The women use the water for many purposes, such as for cleaning, cooking, drinking, bathing, and for irrigation. Because of diseases such as cholera and bilharzia (a disease that causes a person to urinate blood), the women are encouraged to boil the water before consumption or to add bleach in the water. 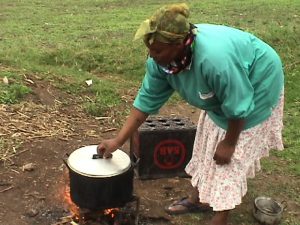 In Zulu culture, cooking is the domain of women. Some Zulu men would rather stay hungry than touch a pot to cook a meal. This habit develops as a result of socialization that teaches men at an early age that the mothers and sisters are supposed to cook for them. Some men who break this rule and cook are seen as weak. However, men who live alone in the men’s hostels quickly learn to perform such chores primarily because women are not allowed to live there except to visit for a short while. Women in the rural areas use fire and cast iron pots to cook. Usually this chore occurs inside the house, but some women prefer to cook outside in order to prevent the smoke from accumulating inside the house. The Zulu people do not normally eat from a common dish, although it used to be like this in the olden days. Depending on the type of meal to be consumed, some people still prefer to eat by hand rather than use spoons. Middle-class Zulu families sit at table during meal times, whereas rural families sit on the grass mats while they enjoy their meal. 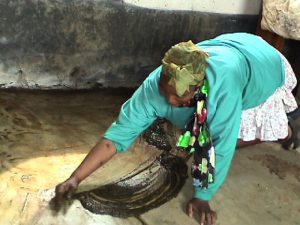 Cleaning homes is another domain that is dominated by women. Rural women use different ways of cleaning their homes, such as using cow dung to polish the floors that have no vinyl carpeting. In urban settings the women use sophisticated machinery for cleaning their homes, such as vacuum cleaners and electric floor polishers. In terms of doing laundry, women in rural areas do their laundry at home or at the river. By doing laundry at the river the women save themselves time and energy that they would use walking long distances while carrying water on their heads. 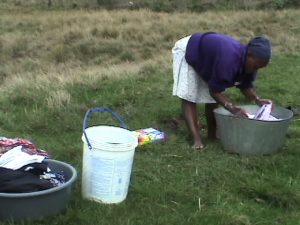 Child-Rearing and Caring for the Elderly

To Zulu women, caring for the children and for the elderly is a fulfilling job. A woman without children is looked down upon and in most cases loses her status of being a wife. If a woman is barren, the husband is encouraged by his family and sometimes by his wife to get a second wife who will bear him children. Sometimes if the couple does not get male children, the man gets a second wife who will supposedly bear him the son. The Zulu people believe that it a man dies without a son the history of the family will vanish because the daughters will get married and leave the home. The implication is that if you have girls only, when you die you will no history behind. The art of carrying a child at the back distinguishes African women from the western women. Interestingly, the women perform other chores such as carrying wood or a bucket full of water while carrying the child at their backs. According to the Zulu culture, the elderly are supposed to be looked after by their daughters-in-law and the grandchildren. It is not natural for Zulu people to send their elderly to the old age homes. Even if the families takes the elderly to the old age homes, the latter of which are in and of themselves a rare commodity, they bring the elderly back home to be with the family at the end of the day.

The Zulu wedding takes many shapes and forms. Usually the bride changes more than three times on her wedding day, showing off to her in-laws how beautiful she is in different colors. Although it is not a Zulu custom for the bride to wear the white wedding gown, nowadays brides prefer to do so. The wedding takes place at the church, and during this time the bride is dressed in white. After church the wedding occurs at the bridegroom’s home. The bride changes into traditional outfit. During the traditional wedding the parties from the bride and the groom’s side compete through Zulu dance and songs.
During this ceremony the family of the groom slaughters a cow to show that they accept the bride in their home. The bride puts money inside the stomach of the cow while the crowd looks on. This is a sign that she is now part of the family. The wedding ceremony ends with the bride giving gifts in the form of blankets to her new family, including the extended family. This tradition is called ukwaba. Even the long-deceased family members receive gifts and are represented by the living ones. The family cover themselves with the blankets in an open area where everybody will see. The spectators ululate, sing, and dance for the family.

Older Zulu women wear clothes that cover their bodies. They wear isicholo, a wide hat made of straw and decorated with beads (ubuhlalu). They also wear isidwaba, a pleated skirt made of cowhide and softened by hand. Younger women sometimes decorate their ‘isidwaba’ with beads, whereas older women wear it plain. Clothing for Zulu girls is mainly made of beadwork and is usually revealing

Beads are the pride of the Zulu nation. Zulu beadwork encompasses a symbolic language that may include reprimands and warnings, messages of love, and encouragement. Different beads carry symbolic meanings that may be used during courtship. When a young man proposes love from a woman, she gives him a gift of betrothal beads as an indication of her acceptance of him. This acceptance is usually followed by lobolo (bride price) by which the young man pays eleven cows to the woman’s family. 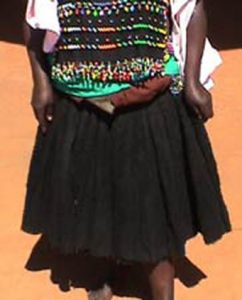 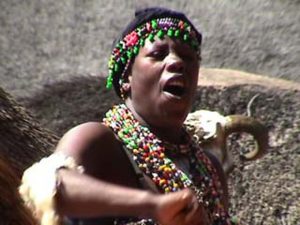 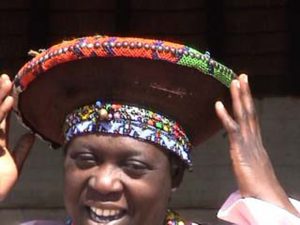 Zulu people believe in ancestors and in traditional healing. They believe that the divine healer, isangoma, has supernatural powers of communicating with the ancestral spirits on their behalf. Isangomas play a significant role among the Zulu nation and are assigned very powerful status among the society. Usually it is women who take up this profession. Isangomas predict the present and the future of the people who come to seek help from them. Sometimes they are expected to find stolen goods. They throw bones to determine the future and to find stolen things. Isangomas work alone or sometimes in conjunction with medicine men (inyanga).

Culture of the Zulu People