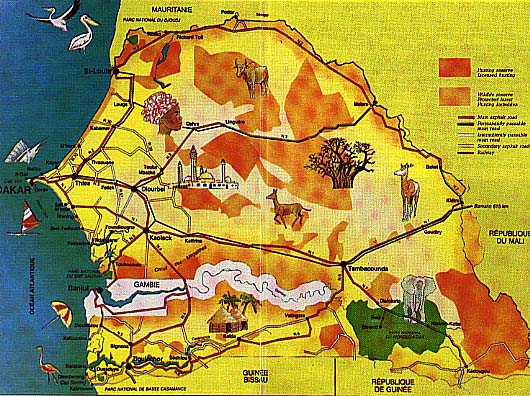 As in most African nations, dozens of distinct languages are spoken in the Senegambia region of West Africa. You can learn Wolof by using our Online Course.

More than 20 African languages are reported in Terminologies Nouvelles , though Ethnologue includes dialects and non-African languages to arrive at the number of 36 for the languages spoken by groups living within Senegal’s boundaries (Mbodj 1994; Ethnologue 1996).  However,the majority of Senegal’s population has adopted an African language as their means of intergroup communication. Although Senegal’s government has followed the trend to keep their former colonizer’s language (French) as the official language, Senegal’s peoples have developed Wolof as their lingua franca. Additionally, Wolof and five other prominent African languages have been made “national languages”, a status which allows them to be used in schools where the majority of students speak one of these six as a native language (Malherbe 1989).

The Wolof people constitute an ethnic majority, representing 42.67% of the country’s population, according to the 1988 census. An unspecified minority of other ethnic groups have adopted Wolof as their native language, and more than one-half of the remaining non-native speaking population uses Wolof as a second or third language. These three groups of Wolof-speakers comprise about 80% of the population, making Senegal one of the most linguistically
unified countries in West Africa ( Mbodj 1994).  Additionally, Wolof is spoken by the majority of people in The Gambia.

Wolof is a member of the West Atlantic sub-branch of the Niger-Congo language family.  A notable trait in most of Niger-Congo’s sub-branches is a system of noun classes, usually marke(?) affixes on nouns and agreement markers on (?) and pronouns. Most languages with noun classes have paired singular and plural classes. The North Atlantic sub-group to which Wolof belongs  is home to some of the most exentsive and elaborate noun class systems in natural languages, including those of  Wolof’s sister languages, Fula and Seereer-Siin.  The  lack of  class markers on the noun proper is one characteristic distinguishing Wolof from other North Atlantic Languages.  Exceptions to this include cases of intitial consonant mutation and the diminutive form (Mc Laughlin 1997).

Instead, the noun class marker is typically the initial consonant of the particle following the noun (example from the b- class: xale bi  the child). The Wolof system includes eight singular class markers and two plurals. Also common to West Atlantic languages are derivitive verbal suffixes, used in Wolof to mark tense, mode, aspect, and negative/affirmative distinctions.

Despite the considerable geographic spread of Wolof speakers, the language is relatively unmarked by dialectal differences (compared to, for example, Seereer or Jola). Variations in Wolof are evident, however, in comparing the Wolof of urban inhabitants to that of rural-dwellers. The Wolof spoken in Dakar, Senegal’s capital, is particularly noted for its high level of French loans or derivitive words and is readily distinguishable from the Wolof spoken in other parts of Senegal. The influence of English on the Wolof of  The Gambia, a former English colony, has also been studied, though the differences do not seem to be such that intercomprehension is hindered greatly.

For more information on Wolof language and culture, see the links below.

Materials on this page are originally created by Joy Rowe.