Ngizim is spoken in Yobe State, Nigeria, in the area to the east and south of Potiskum, the largest city in Yobe State, as well as in Potiskum, which was originally an Ngizim town. It is one of seven languages of the Chadic family indigenous to Yobe State, the others being Bade, Bole, Duwai, Karekare, Maka, and Ngamo. Ngizim is a member of the West Branch of Chadic and is hence related to Hausa, the dominant language throughout northern Nigeria. Ngizim’s closest linguistic relatives are, however, Bade, spoken north of Potiskum in Bade (Bedde) Emirate, whose capital is Gashua, and Duwai, spoken east and south of Gashua.

The Ethnologue gives a 1993 population figure of 80,000 for Ngizim speakers, which seems not unreasonable. The pre-eminent traditional ruler of the Ngizim people is Mai Potiskum, HRH Alhaji Umaru Bubaram, whose court is located in Yarimaram, near Potiskum. Like all the traditional rulers of northern Nigeria, Mai Potiskum is the prime Islamic figure for the Ngizim people. Most Ngizims are Muslims, but a significant number are Christian, and there may be some who continue to adhere to the traditional religion.

Unlike some of the other languages in Yobe State, Ngizim has very little dialect variation. The Ngizim people pronounce the name as “Ng@z@m” (@ = a high central vowel, a “barred i” in the International Phonetic Alphabet). The origin of the name is uncertain. The same root is used in Bade to refer to various ethnic or regional variations of closely related languages, not just the people currently referred to as “Ngizim”. The table below shows the current autonyms for the people and language as well as the terms in Hausa and also in Kanuri, for many centuries the dominant linguistic and cultural force in northeastern Nigeria.

Most previous published work on Ngizim, including a Dictionary of Ngizim published in 1981, derives from research done by Russell Schuh in 1969-70, when he was a Research Assistant on a comparative Chadic project (funded by the US National Science Foundation, grant #2279, Paul Newman, Principal Investigator). Schuh also worked on Ngizim for brief periods in the 1970’s and 1980’s, but the main new initiative to make documentation in and on Ngizim available to the Ngizim people and a larger public is the Yobe Languages Research Project. This project has been supported by two awards from the US National Science Foundation. The first, “The Chadic Languages of Yobe State, Nigeria” (award #BCS-0111289, Russell G. Schuh, Principal Investigator), ran from 2001-2004. The second, “Lexicon, Linguistic Structure, and Verbal Arts in Chadic Languages of Northeastern Nigeria” (award #BCS-0553222, Russell G. Schuh, Principal Investigator), runs from 2006-2009. Directors of the project under both grants are Russell G. Schuh, the Principal Investigator, and Alhaji Maina Gimba, the In-Country Director. Members of the Ngizim team during the first funding period were Muhammad Adamu, Ahmed M. Baidu, Joseph Ya’u Yakubu, and Usman Garba Potiskum. For the the second funding period, the Ngizim team has been Muhammad Adamu and Usman Babayo Garba Potiskum. Thanks go also to HRH Alhaji Umaru Bubaram, Mai Potiskum for his support and to Madu Liman and his family for indispensable logistic support. 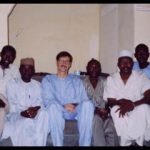 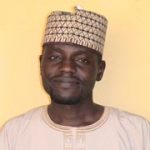 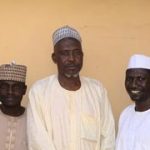 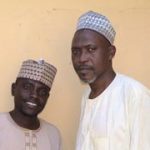 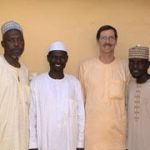 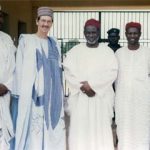 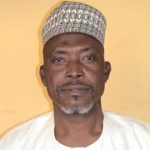 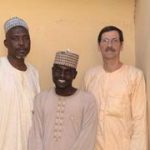 Ngizim Tales and Other Texts 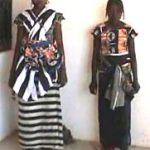 New bride with her “helper” (a young girl who will stay with her to help her out for several days after she moves to her husband’s house). Note the multiple cloths wrapped at the bride’s waist and the black and white striped traditional wrapper. Reinactment taken January 9, 2009 at the Mai Pataskum Museum, Usman Babayo Garba, Curator. 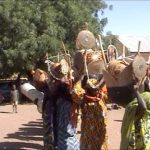 Procession of women carrying damba calabashes to a new bride’s home. Note the white cord linking the calabashes. Clip from video taken in Degubi, January 31, 2009. This is actually a Karekare town, but the customs for the wedding procession are the same as for the Ngizims. 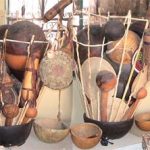 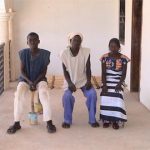 Groom, his friend, and his “ambassador” sitting on a cornstalk bed to greet visitors after bride has been taken to her new home. Note blue shirt worn by groom and white shirt worn by friend. Reinactment taken January 9, 2009 at Mai Pataskum Museum, Usman Babayo Garba, Curator.

Bedlamu na Ja [The Hyena and the Dog]: The hyena and the dog live together, with a mutually agreed arrangement that the dog care for the children and the hyena go hunting for food. The dog and her children eat the hyena’s children while she is gone, setting a series of events in motion.

Bedlamu na Kayak [The Hyena and the Squirrel]: The squirrel and the hyena decide to visit the king, but the squirrel gives the hyena some bad advice about a gift, setting a series of events in motion.

Gayim na Gaskam [The Cat and the Rooster]: The cat and the rooster are friends, but the cat is afraid of the rooster, fearing that he will be burned by the “hot coals” on his friend’s head. Once he discovers his mistake, the trouble starts!

D’ayak [A Goat]: A goat, on reaching the age to get married, asks the father of his friend, the ram, to make him a charm so girls will like him. The ram’s father gives him some advice, which he rejects, and his adventures start.

Gomak [A Ram]: A ram makes his living by traveling to far off lands for trading. He amasses considerable wealth and marries several wives. Things are going fine until he decides to marry a hyena, against the advice of his friends.

Benderkuku [Bundurkuku]: Bundurkuku was a giant and a great hunter specializing in elephants. One day, a hyena comes and is trying to eat part of his house, which is constructed with bones and other remains of his hunting exploits. Bundurkuku takes the hyena on as a hunting protege. After a few years, Bundurkuku dies, and the hyena tries to emulate the exploits of Bundurkuku, with amusing results.

Ruwa [Songs] (song texts are not yet ready for download)

The songs in the text are ordered more or less in “life order”. For an outsider, the content seems extremely allusive, disconnected, and hard to understand. Each song is accompanied by a commentary that helps in understanding the theme and key lines.

Dadegerakem [It’s Your Limit] (a song for a new bride)

Arayye Gaja (the same basic song as the one just above, but this one about the practice of sorcery)

(The refrain phrase, Aiye Karniga Jinga Karniga, sets the rhythm for a large variety of songs.)

Kayak na Bedlamu na Temaku [The Squirrel, the Hyena, and the Sheep], Tambai Barema: A tale narrated in 1970 in Potiskum. The squirrel misleads the sheep and the hyena to set up lodging together. (Recording available.)

Devek Barakau [The Way Barakau (is performed)]: Barakau was the most important pre-Islamic Ngizim ritual, done annually during the planting season. This text describing the ritual is accompanied by a movie showing still pictures taken in Yandiski, a village near Potiskum, in August 1970. The movie includes recordings of invocations made as part of the ritual.

In Winter Quarter 2002, Prof. Russell G. Schuh gave a graduate proseminar at UCLA on the phonology and morphology of the Bade and Ngizim languages, base on data collected prior to the Yobe Languages Research Project. As part of this project Russell G. Schuh prepared extensive descriptive handouts that and posted on a course website as pdf files. In addition to descriptions of phonology and morphology, there is a bibliography and a couple of papers on historical phonology. Click here to see the course website and links to handouts and papers.