Watch what you say!

Malam Abdullahi’s wives are eating with their friends, Mai Jidda and Hajiya Hafsat. Mai Jidda is enjoying her food so much that her mind wanders to other nice things. She shows her lack of sophistication by commiting “santi”!

“Santi” is a Hausa cultural concept which is hard to define precisely. It always involves making some kind of remark during eating. This will typically be a complimentary comment about the food itself or about some pleasant thought that comes to the mind of the speaker, for example a comment about nice clothes or about how fat one’s livestock are. To commit “santi” is considered boorish or unsophisticated.

What are the women doing?

They are laughing at Mai Jidda, who has just committed “santi”.

What did Mai Jidda do? 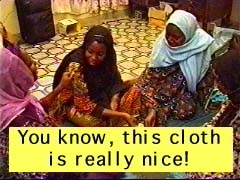 Mai Jidda remarked on Hajiya Hafsat’s clothes. Her remark came out of the blue and probably just popped to her mind because she was enjoying her meal so much. She therefore committed “santi”, making her look ridiculous.

Why do the Hausas frown on “santi”?

Can you think of any kinds of talk or other actions in your culture that might cause people to laugh or frown during a meal?

Sorry. This form is no longer accepting new submissions.