Skip to main content
Home > Language materials > The Chadic languages of Central Africa > Hausa > Watch what hand you eat with!

Watch what hand you eat with!

Malam Abdullahi and his friends are eating, when their attention turns to the boys eating next to them. Malam Abdullahi sees his son engaged in one of the worst possible breaches of eating etiquette.

“Kunya” is a Hausa word whose meaning includes (at least) embarrassment, shame, modesty, and deference. It is a feeling which certain social circumstances arouse. One area where “kunya” is important is in social relations. For example, in-laws feel “kunya” toward each other. A son-in-law would not call his father-in-law by name, would assume a kneeling position while greeting him, and so on. One also feels “kunya” when publicly caught violating some social restriction. This would be the case for Suhailu, who was eating with his left hand.

What has just happened to Suhailu in this picture? 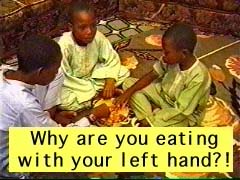 Suhailu’s father has just scolded him for eating with his left hand. Hausas avoid using the left hand for all kinds of activities-writing, giving or receiving things, and above all, eating.

How do you think Suhailu feels? 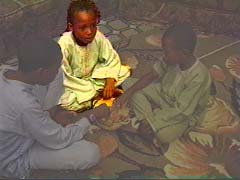 Suhailu is probably feeling “kunya”. By eating with his left hand, he has broken a social rule which has been drilled into him since he was old enough to understand.

Why do you think Hausas frown on Suhailu’s behavior?