Unlike most European languages, differences in Hausa verbs do not usually relate to marking verb tense. However, Hausa has several verb classes that differ primarily in the forms that verbs take depending on their objects or lack of objects. The factors that affect the forms of verbs are the following: 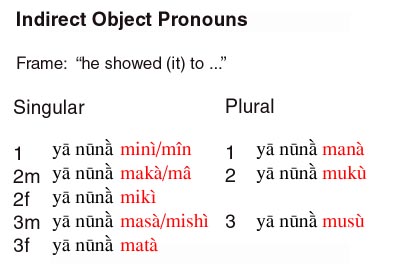 Variable Vowel Verbs (“VVV’s”), called Grade 2 in the Hausa Grade System, change their final vowel depending on the type of object which follows the verb. This is true for all verb tenses other than the Continuative (which uses the verbal noun rather than the base verb). The vowel variants of VVV’s are as follows: 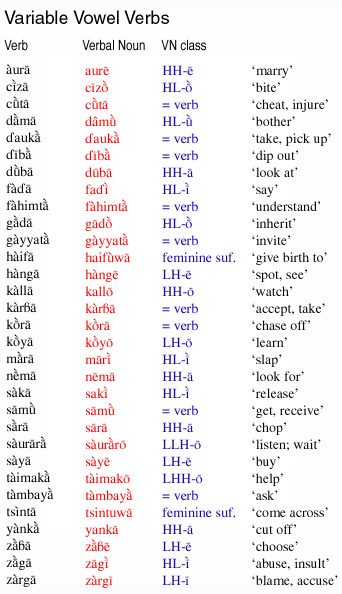 Before indirect objects, VVV’s take one of two patterns. One must simply learn which pattern applies to a particular verb. Some verbs can use either (as with tambaya ‘ask’ below). 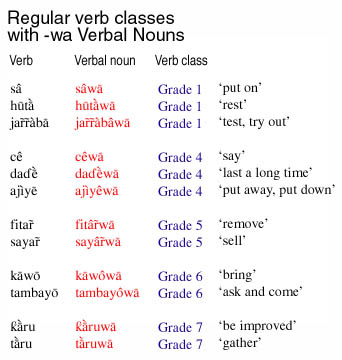 By “regular” we mean verbs which follow predictable patterns of the majority of the basic verbs of Hausa. Here, we will consider only verbs which begin in High-Tone and end in -a or -e. (In the technical terminology of the Hausa Grade System, these are Grades 1 & 4.) These verbs have the following forms:

By far the largest classes of underived verbs in Hausa are Variable Vowel Verbs and “regular” verbs ending in -a or -e. There are a few verbs in Hausa which do not follow the patterns of these verbs. We divide them into five groups here:

What are derived verbs?

By saying a verb is “derived”, we mean that its base form has undergone some kind of change which shows the addition of special meaning to the base form. Hausa has four principal types of verb derivation. They are:

We can divide 99% of the verbs of Hausa into two groups–“base” and “derived”. In the terminology of the Hausa Grade System they are as follows:

It turns out that Hausa can put a verb that has a particular base form into a different “base” form to give it a derived meaning! The main meanings that these “derived base” forms can provide are as follows, illustrated with some of the base forms from the examples in the table above.

-o Verbs: Action toward the speaker

Almost any verb in Hausa can take an -o form (also known as “ventive” and called “Grade 6” in the Hausa Grade System). The meaning of the -o form is sometimes characterized as “action toward the speaker”. This meaning works for most verbs that involve some sort of directional motion, such as shiga ‘enter, go in’ and its -o counterpart shigo ‘enter, come in’, but this meaning doesn’t work very well for verbs that involve no motion. A more comprehensive definition might be:

“An action which takes place or has its beginning at a distance from the speaker but which has its primary effect at the location of the speaker (or a location which the speaker is taking as a point of reference).”

Here are a few verbs contrasting the meaning in the base form and the -o form:

One forms an -o form from a base verb as follows:

-o verbs are invariable, regardless of what type of object (or lack of object) follows:

-u Verbs: Intransitive or ‘passive”

The -u form is sometimes characterized as a “passive” because of the possiblity of translating some -u forms with an English passive, e.g. compare sun soya nama ‘they fried the meat’ with the -u counterpart nama ya soyu ‘the meat is fried’. Here, the object, nama ‘meat’, has become the subject of the -u derived form, parallel to the English active vs. passive translations.

However, if one has in mind the English passive as a characterization of the meaning of the Hausa -u form, “passive” is not a good characterization. English passive always implies the existence of an agent of the action, and the agent can be expressed by a “by” phrase, e.g. ‘the meat was fried by the chef’. A Hausa -u verb does not imply the existence of an agent (or better, one might say that the existence of an agent is not important when one uses a -u verb), and indeed it is not possible to express the agent of the action of a -u verb using something like an English “by” phrase. English passive is often used with no expressed agent, either because the specific agent is not known (“my car was stolen”–but I don’t know who did the stealing) or because the speaker wants to avoid mentioning the agent (“mistakes were made”). To convey this notion of “agentless passive”, Hausa uses a sentence with an impersonal subject, NOT the -u form.

A characterization of the -u form would be something like the following:

“The subject of a -u verb has undergone or has the potential for undergoing the action expressed by the verb. To the base meaning of the verb, the -u verb often adds a sense thoroughness or taking the action to its limit.”

Here are a few verbs contrasting the meaning in the base form and the -u form:

There are a few commonly used -u verbs which have meanings that may not be readily predicted from the meaning of the base verbs, though they all share the property of being intransitive, with the subject being the undergoer of the action:

One forms an -o form from a base verb as follows: 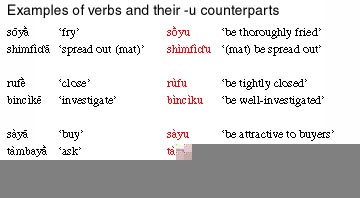 Since all -u verbs are intransitive, they cannot take any kind of object and hence have the same form in all contexts.

As the term “Causative” implies, the Causative form indicates that a person or object is “caused” to undergo the action of the base verb. One should not take the notion “cause” too literally, however. “Cause” in the literal sense would mean that the agent wielded some outside force that caused the event to happen (Hausa does have a separate verb sa ’cause’ to express this notion). A few example verbs will clarify the element of meaning that the Causative derivation adds. 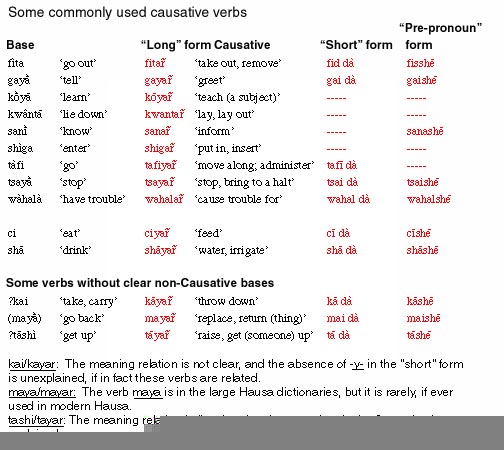 Technical note on dialect differences in the treatment of Causative “da”

Western and Northern dialects of Hausa treat the da as an ending on the verb, i.e. it is part of the verb. These dialects generally use only the form called “short” form causative here, treating it as a regular Hi-Lo-a verb (“Grade 1” in the Hausa Grade System). The forms for the Causative counterpart of tsaya ‘stop’ would be as follows:

Verbal nouns are words based on verbs but which can be used as nouns. Verbal nouns can be used like any other noun, say, as a subject or object of a sentence. Hausa also requires a verbal noun as the form of the verb in the continuative. The examples below illustrate some uses of verbal nouns with the verbal noun tafiya ‘traveling’, which comes from the verb tafi ‘go, leave’.

Form a -wa verbal noun in the following way:

With fewer than 10 exceptions, all verbs with the following characteristics can use -wa verbal nouns:

Base Forms in the Verbal Grade System

The late F.W. Parsons devised a system of Hausa verb classification which has become the frame of reference for all Hausa scholars (see reference). This system groups verbs into seven Grades, where a “Grade” refers to the pattern of tones and final vowel which the verb carries. The seven Grades are as follows:

Objects with the Verbal Grades

An important feature differentiating the verbal grades is the forms that verbs take before objects. Parsons spoke of four contexts, which he called A, B, C, and D. The table below lays out what those contexts are and the form each grade takes in each context. The highlighted links open windows which show illustrative verbs of each grade in each context from the relevant sections of the online grammar.

*A substantial number of two syllable intransitive verbs which could be considered Grade 3 have Hi-Hi tones, e.g. kwana ‘spend the night’, b’uya ‘hide’. Most of these have a heavy first syllable whereas most Lo-Hi Grade 3 verbs have a light first syllable.

Parsons differentiated between what he considered to be “basic” Grades, viz. Grades 1-3, and “derived” grades, viz. Grades 4-7. This division refers in part to predictability in form, but primarily to meaning.

Parsons also noted that Grade 4 verbs form a sort of mixed category. There are some Grade 4 verbs which seem to have basic meanings that would not differentiate them in any systematic way from verbs in Grades 1-3:

It is, however, possible to change verbs from Grades 1-3 into Grade 4 to create derived meanings (see just below).

Meaning: The main reason for making a distinction between basic and derived grades is that, by and large, when a root is found in one of the derived grades, there is a fairly constant element of meaning associated with the Grade form, an element of meaning which is absent in the basic grades. This is particularly clear in Grades 5-7. Click on the highlighted links for a discussion of meaning in the online grammar:

We can divide 99% of the verbs of Hausa into two groups–“base” and “derived”. In the terminology of the Hausa Grade System they are as follows:

It turns out that Hausa can put a verb that has a particular base form into a different “base” form to give it a derived meaning! The main meanings that these “derived base” forms can provide are as follows, illustrated with some of the base forms from the examples in the table above.

Some problems with the grade system

The Grade system provides a frame of reference for all but a handful of Hausa verbs. All Hausa specialists use it, and there is no question as to its usefulness and the fact that it reflects real categories of Hausa verbs. Nonetheless, it does have some shortcomings.

Sorry. This form is no longer accepting new submissions.