Nouns modified by adjectives and other words expressing qualities:

Comments on “Quality” Words in Hausa

English expresses qualities almost entirely using adjectives (‘white cow’, ‘strong cow’, ‘hungry cow’, etc.). Hausa does have some adjectives, but most qualities are expressed using nouns corresponding to English ‘strength’, ‘hunger’, etc. When modifying a noun by some quality word in Hausa, the construction will differ depending on whether the quality word is an adjective or a noun.

The most commonly heard way of modifying a noun by an adjective is as follows:

The word order Noun + Adjective is also possible. Using this order, the adjective must agree with the noun in gender or plurality, but no linker connects the noun and adjective. The meaning is essentially the same as the Adjective + Noun order, though the Noun + Adjective order tends to place emphasis on the adjective, i.e. ‘a WHITE cow’ rather than ‘a BLACK cow’.

To use a quality noun as a modifier of another noun, the words are linked using mai ‘possessor of…’ for singular nouns (both masculineand feminine) and masu ‘possessors of…’ for plural nouns, i.e. the literal translation of the Hausa expression meaning ‘strong cow’ would be ‘cow possessor of strength’.

A few expressions using quality nouns may take the form Noun-linker Quality noun. There are essentially fixed expressions, not a method of modification can be used with just any noun + any quality noun.

The word nawa? ‘how many?, how much?’ is just like a number in terms of its position and requirements on plural forms of nouns.

There is one situation where the plural form of the noun is not used. This is when thing modified by the number represents a unit, such as a quantity of money, a quantity of purchased items, or a span of time.

Comments on the use of Genitive (“possessive”) Constructions

A genitive or “possessive” construction has the following form in Hausa:

The general term “genitive” is preferable to the term “possessive” since the genitive construction signals many kinds of relations between words other than “possession”. A few examples are the following. The genitive “linker” is in red.

Two things show that words are in a genitive construction:

The “linker”: Words in a genitive construction (as well as certain other constructions, such as adjective + noun) always have a “linker” with one of the following forms:

Pronunciation of the feminine linker “-r”: Although the feminine linker is written -r and CAN be pronounced as “r”, in speech it is almost always pronounced as a doubling of the next consonant. (This is actually a general feature of Hausa trilled “r”, i.e. any trilled “r” can take this pronunciation.) Thus, the following pronunciations are options, with the right-hand form being the more common in speech. Note that if the second is written as beginning with a vowel, in speech one hears a double glottal stop, since all words written with a vowel in Hausa are actually pronounced with a glottal stop:

Genitive Constructions Consisting of a Noun Plus a Pronoun: ‘her friend’

Genitive constructions with a pronoun modifier or “possessor” use a special set of genitive pronouns in a construction of the following form: 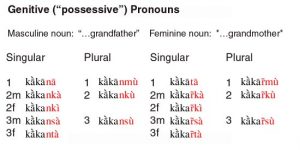 Technical Remarks on the Feminine Linker

Compare the form of the masculine and feminine linkers in the following phrases. The linkers are in red:

The masculine linker is pronounced “n” in every phrase. The feminine linker, on the other hand, is pronounced as either “r” or as a doubling of the next consonant in the first two phrases, but it is always pronounced “t” with the first person genitive pronoun -a.

But in the case of the first person singular pronoun -a, the feminine linker “t” was NOT at the end of a syllable, i.e. it BEGAN the syllable which had the -a pronoun as its vowel. It therefore did not become “r” in just this one case.

How “real” is the pronoun -a in modern Hausa: The explanation above is the historical reason for why Hausa today has genitive constructions with first person singular -n-a masculine and -t-a feminine. Evidence for this analysis comes both from within Hausa and from related languages. There is some question, however, whether this analysis is “real” in the minds of Hausa speakers today. It seems that many (maybe most or even all?!) Hausa speakers see Hausa as having two special first person singular genitive pronouns -na and -ta, i.e. in these cases the n and t are just part of the pronoun, not the linker. From the purely analytical point of view of the linguist, this is “wrong”, but from the psychological standpoint of speakers of a language, the linguist’s analysis is often irrelevant to the way they think about and speak their language!

Placing Emphasis on the Genitive Pronoun

In order to emphasize the pronoun in a genitive phrase, a special construction is available:

When the “possessed” or “modified” noun is understood and only the “possessor” or modifier is expressed, the independent genitive takes the following forms:

The independent gentive pronouns take basically the same form, but the na or ta have long vowels, and the first person singular has a Low-High tone pattern rather than High-Low as in other persons.

Ordinal numbers (‘first’, ‘second’, etc.) are expressed using independent genitive na (masculine or plural) and ta(feminine) plus a cardinal number. ‘First’ has a special form, farko or fari ‘beginning’, though d’aya ‘one’ can also be used in the ordinal construction to mean ‘first’.