Hausa has no verb ‘have’. Hausa expresses the concept of “having” using the preposition da ‘with’ in a construction which might be translated “be with”. 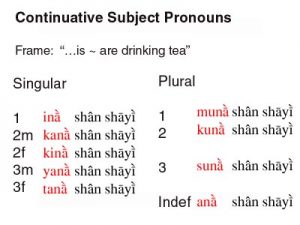 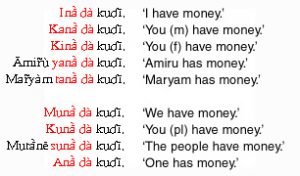 Negative ‘have’ sentences use a special set of negative continuative pronouns, with a falling tone ba followed by a high tone pronoun. 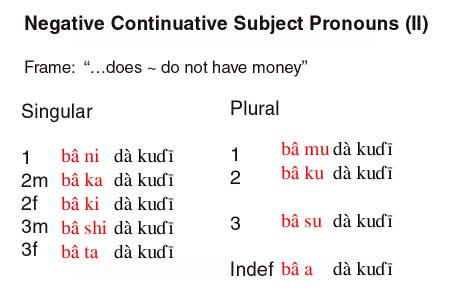 ‘have’ Subject Questions: ‘Who has money?’ 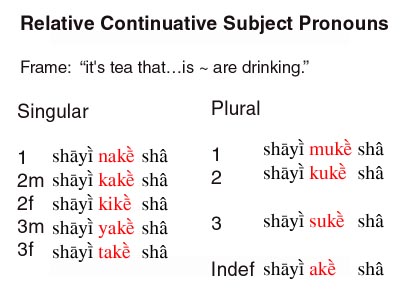 ‘have’ Object Questions: ‘What do you have?’

When questioning the object of a ‘have’ sentence, the question word me? ‘what?’ goes at the beginning of the sentence. This necessitates two changes from basic ‘have’ sentences:

Emphasized Words in ‘have’ Sentences: ‘You have money.’ ‘Money is what you have.’

Emphasis of words in ‘have’ sentences follows the same general patterns as asking questions.

To show that a noun subject is emphasized, use the relative form of the pronoun ending in –ke. (See ‘have’ subject questions for further information on the form of subject pronouns.) This is sufficient to show emphasis, though you can add ne ‘it is (masculine)’ or ce ‘it is (feminine)’ after the noun.If a pronoun subject is emphasized, the independent pronoun precedes the relative subject pronoun. As with emphasized noun subjects, ne or ce may follow the pronoun.

Expressing Qualities with ‘have’: ‘she is beautiful’, ‘the knife is sharp’

Hausa expresses some qualities using adjectives (see discussion of sentences with adjectives),but Hausa uses nouns to express most qualities. Thus, insteadof saying, “She is beautiful,” Hausa says, “Shehas beauty;” instead of saying, “the knife is sharp,”Hausa says, “The knife has sharpness.”